The Moon Was Spectacular Over The Weekend!

Ask E.R. Nurses or your local police, and they will tell you that when the moon is full, the incidences of accidents and violence significantly elevate. 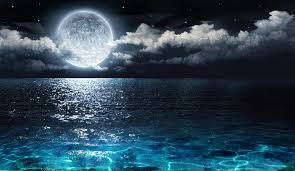 The moon exerts an electromagnetic pull on water, which is what our bodies are mostly made of.

The cycles of the moon affect the balance of ions in the atmosphere which affects the number of positive ions on the earths surface. The reasonant pattern of the ocean waves has been set in motion by the gravitational effect of the orbiting moon on the rotating earth over a period of time.

When the positive ions mix with the ones on the earths surface that are more negatively charged, it results in changes in our bloodstream. Blood cells and the walls of our veins and arteries usually hold a negative charge. This allows for a free flow of blood.

When the moon is full, the ions in our blood become more positive, so the flow of blood gets stickier. This directly affects the efficiency of our body to oxygenate itself. The result? Possible headache, stress, and tension.

Plants, specifically pines and asparagus ferns, emit tons of negative ions, as do large bodies of water like lakes and the ocean.  If you tend to be stressed or over-anxious during full moon cycles, try going camping, or going out and enjoying nature where you can. You might even find some relief in your own bathtub, or by filling your home with plants!

Research has shown in Australia, Canada, and the U.K., that there were as many studies that showed increased animal bites and there was a no higher incidence, however, a full moon makes it easier to see at night, so there are higher incidences of animals out hunting. For the same reason, there are fewer prey animals out, but because animals migrate at night, the brighter lighting allows for more incidences.

There are more hurricanes, arson, murder, epileptic seizures, and all around more aggravation during a full moon. Check the morning news today to see if there was more craziness in your neighborhood this weekend! Then, take a bath.