Qi Gong Is For Me 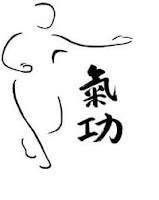 Qi Gong is a slow, focused form of movement that is both relaxing and strengthening at the same time. Unlike yoga, the muscles aren't stretched at the joint so aggressively, so if you have joint problems, it's less stressful to perform.

There is a form of Qi Gong called Baduanjin, which is 8 specific movements called the 8 Brocades, or Silken Moves that flow together and can be easily remembered.

There are some great beginner DVD's to follow (Lee Holden, Chris Pei, Deborah Davis, Matthew Cohen) and I recommend checking out some of the 8 Brocade performances on YouTube.

I've been able to maintain strength through practicing Qi Gong, and a knee injury that was bothersome with yoga is no longer an issue.
Posted by Kathy D. at 8:42 AM

Kathy Duncan LMT has been a health and fitness educator since 1976. She has authored many articles, a lifestyle blog, and a book on horse fitness available at most bookstores and including a book called The Fit Horse Companion on Amazon.com
She is a Certified Personal Trainer, Licensed Massage Therapist, and Certified Professional Coach.
Kathy's specialty is motivating people to achieve their goals in all aspects of their lives. Getting organized by clearing chaos brings a more focused approach to devising a master plan for life's many transitions.