Wow! What A Gorgeous (But Early) Off Season 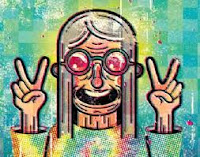 This gorgeous weather has its good and bad points. First of all, the warm winter has seriously affected the Aspen ski season. No snow, warm weather = slow tourism. Since work is slow, we've been taking the time to enjoy the outdoors. It is seriously windy today ... I am converting my office into a small training studio. I am thrilled to be back to training people for their summer sports, and really thrilled to be working with older adults. I am able to put great programs together for older adults because I am one! Oy Vey. 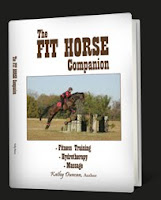 Spring Rolls Are For The Springtime!

I love fried Chinese food. There is no doubt that I will always have a weakness for fried stuff that can be dipped in something! Recently, I stopped at the Vitamin Cottage for one of their fast grab from the deli case lunches when I stumbled upon Spring Rolls in Rice Paper. Something to dip, but not fried.

You might think that since they’re not fried, they might be doughy. Not so. Although the Vitamin Cottage does not carry rice paper, I was referred to the local Oriental Grocery Store where the 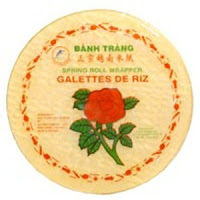 rice paper is carried. 8 1/2 inch in size, and stiff like a piece of parchment paper, I was instructed to soak the paper discs in warm water, then wrap whatever I want in them. The owner of the store set me up! Here is what she sold me;

Rice paper, cellophane noodles, hot sauce, rice vinegar, and a vegetable slicer sort of like a potato peeler, but it slices veggies like carrots and cukes in long, stringy lengths.

I soaked and cut (like vermicelli) and cooked the cellophane noodles, soaked the rice paper, and sliced the vegetables. Simple. I wrapped the mixture in the cool paper. Then I mixed the hot sauce with the rice vinegar for dipping. That Oriental Hot Sauce is hotter than Mexican Hot Sauce or Tabasco, so cool it with a lot of the vinegar.

I have saved so many calories by not using bread in my lunch. This is an exceptionally low calorie, healthy and delicious dipping lunch! I have substituted French Salad Dressing, Mustard, and a few other things for the hot sauce, Try it. If you don’t have a local Oriental Market, Amazon.com carries rice paper.

If you’re a meat eater, shrimp, pulled pork, or many other fish and meat choices can be made. This is my new summer meal. Try it!
at March 18, 2012 No comments: 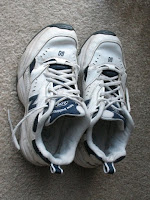 I remember back when the grocery store started carrying fancy pointed toed tennis shoes, or in the early 1960’s, called “sneakers.” I rode my bike to the store to buy a cool spotted pair for $1.99. My entire babysitting stash went to one pair of shoes.

In the mid 1970’s I became a part of the aerobic craze, and lucky me, became an originator of exercise classes taught to the beat of music. Seriously. How was I supposed to know that jumping up and down on a cement YMCA floor with spotted grocery store sneakers would not be advised in the years to come? In fact, suspended floors and very expensive and scientifically engineered cross training shoes would be the thing of the future.

Over the years I have worn and learned everything about the engineering of shoes. For a time I received free Nike court shoes as a racquetball pro. I wore Avia shoes for teaching aerobics, and had support socks given to me by Nike for shin splints.

As my career as an active athlete waned, I worked out less, and wore each pair of shoes fewer times a week. Look at these shoes. Do they look anywhere near finished to you? Well, most recently, each time that I walked, outside or on the treadmill, my leg would ache. Eventually, my knee began to ache and pop. Then, my ankle started to hurt, until one day I woke up with a knee and ankle that were aching beyond belief.

After a medical exam I was told that my patella was not tracking properly and that I had patella femoral pain syndrome. This means having to get my knee back on track to prevent any future damage. Since I had been walking and running more than usual, I decided to take a look at my shoes. In my research I discovered that runners generally put 350-500 miles on their running shoes. OMG! I put that on this very pair of shoes over 7 years ago! It’s like I’m driving a car with 400,000 miles. No wonder the tires are worn and the frame has begun to take on a severe imbalance!

I tried many types and styles of shoes, and bought a lovely pair of Teva cross trainers with a nice cushioned sole. Only two weeks later, with new shoes and a simple exercise program, my leg is straighter and almost pain free. This has been an inexpensive but successful lesson for me. At the age of 59 I feel fortunate that I was blessed with this awareness before I really hurt myself.

If you’re a walker, runner, or aerobics advocate and you’re having ankle, leg, knee, or hip pain, have it checked out by the doc, but consider how many miles that you have on your shoes.
at March 14, 2012 No comments:

Email ThisBlogThis!Share to TwitterShare to FacebookShare to Pinterest
Labels: Mileage On Athletic Shoes And Leg Pain

I'm reading the National Bestseller called The China Study by T. Colin Campbell, PhD and Thomas M. Campbell 11. Called the most comprehensive study of nutrition ever conducted, this book is startling! No matter how clean that I think that my diet is, I have always fallen prey to a hot dog or a bag of Oreos now and then. I believe that I won't be so easily persuaded from now on.

Cornell University (eCornell) has an online Plant-Based Nutrition program taught by Thomas Campbell. I hope to take it someday soon.
at March 12, 2012 No comments:

Email ThisBlogThis!Share to TwitterShare to FacebookShare to Pinterest
Labels: The China Study

If you're a horse person, you've probably heard by now that Stacy Westfall's lovely horse Roxy passed away last week after an accident in her stall. They were one of the most impressive horse and human teams that I've ever seen. For a look at the YouTube tribute video, you can visit Stacy's blog for the link. There are several links popping up on YouTube. Be prepared to cry your eyes out! www.westfallhorsemanship.com
at March 07, 2012 No comments:

Last night I made homemade baguettes, tonight the group is making eggplant-parmesian meatballs with sauce. I'm so hungry right now, I shouldn't even be writing about food. Because we will be using bread crumbs and parmesian cheese in the (non) Meatballs, we will be calorie challenged. The challenge will be to find the right texture with limited cheese and no eggs. I've made the recipe successfully, so I hope that we have the same consistency tonight.

The sauce will include lots of herbs and sun-dried tomatoes from my 2011 garden. Next week; Spring Rolls with wet rice paper. The "Awesome" factor will be determined by the dipping sauce that we decide to make. I like plum sauce ... or wasabi ... or hot mustard ...
at March 02, 2012 No comments: