Yoga. It is a union.

Yoga. It’s not just exercise. The word Yoga means union, as in the union between the mind and body. The practice of Yoga is based on the 2,000 year old writings of the Sage Patanjali. The writings, called the Sutras, include the 8 limbs of Raja Yoga. Long story short, these limbs are statements of moral behavior that a practicing Yogi lives by ... or practices hard to live by. The belief is that if you live morally and ethically, and learn how to properly breathe while practicing the asanas (postures) that will cleanse your organs, clear your chakras, and clear needless chatter from your mind, you will become open to communication with the divine. You will reach the highest form of enlightenment.

The 8 limbs of Raja Yoga, which I will list later in this article, are essentially ... I don’t want to say “rules,” but they are moral principles. You already know that when you’re in a life slump and you eat or drink junk until you can’t even stand yourself, the last thing that you feel is spiritual or Godly. When you wake up from your binge and go back to eating right and taking care of yourself, it gets better. Your mind becomes clearer, and you are able to exercise to get back to the top of your game. It is during these times of clarity that you are able to open your mind and body to a better relationship with the divine. Living, eating, and behaving ethically as your full time lifestyle is the goal.

This morning, I received one of my favorite Fitness Magazines with an all too common article claiming that the Yoga being taught in health clubs is a fitness class rather than a mind-body program. Some practicing “Yogis,” who live their lives according to the teachings of Patanjali have a problem with health club exercises being referred to as Yoga.

That’s one of those sketchy issues in life. Mmmm ... Who owns Yoga? I was raised speaking latin in Mass. Who had the right to change Catholic Mass into English and still call it Mass? I think that it’s universally understood what Yoga means on a health club class schedule. It means slow stretching incorporated with relaxing breathing. Some teachers incorporate the spiritual concepts, some do not.

Okay, so that brings me to my point. Does a latin versus english spoken mass bring you closer to God? Or, better yet, does a real Yogi who lives by the 8 limbs of Raja Yoga judge others for practicing Asanas and Pranayama for clarity of mind and body without knowing the rules? Do the people whom so shallowly practicing these limbs benefit from it? Do the righteous few really want for the basic Hatha Yoga classes to change their name to “Stretch and Breathe” for fear of dis-honoring the Sutras?

There seems to be a spiritual disconnect here. If you are indeed a practicing yogi, you should be interested in YOUR behavior, your relationship with the divine, and your own enlightenment. Taking the time to judge others for exercising, breathing properly, and bettering themself on any level is not okay.

Over the years I watched the medical profession set boundaries for massage therapists, then the veterinary boards stepped in to legislate animal therapies. The bottom line for this type of intervention is often more about money than skills.

The Yoga Alliance, a certifying organization has set new guidelines for Yoga Teacher training. More yoga teachers are being trained in the holistic teaching of yoga as it is meant to be practiced. The requirements for 200 hour teacher certification includes asanas, pranayamas, kriyas, chanting, mantra, meditation and other traditional yoga techniques.

My question is that if we are truly interested in teaching yoga as the Sage Patanjali had intended, we would not be becoming certified by a Western Alliance, we would be sharing the traditional information at no cost. This is how Paramahansa Yogananda’s Kriya Yoga is still shared. You need to study and practice the methods for a long period of time before you are accepted to practice. There are no free rides to enlightenment.

My advice to those who are concerned with what everybody else is doing, is to practice, practice, practice. Stretching and breathing properly (asana, pranayama) are only a couple of the first steps to practicing yoga as it was intended. People practicing basic Hatha Yoga at their health club are on the right track! Yoga, meaning “union” is the union of the mind and body. Breathing and postures together is where the union begins. Here are the 8 limbs of Raja Yoga;

If you are an experienced traditional Yoga teacher that wants change in the fitness style of teaching Yoga, volunteer your services and make that change! Namaste. kd
at August 19, 2011 No comments:

Before and After ... Plant a garden! 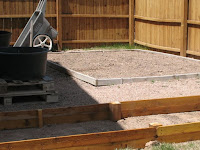 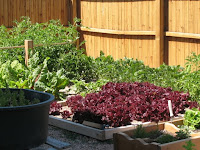 Summertime is the bomb! We eat so much salad in August, I almost get tired of it. Almost. Yesterday I picked about 10 pounds of green beans. and the red lettuce is taking over.

Because of the weather in Colorado, we can’t plant until after the last weekend in May, so our season is short. That doesn’t really seem to matter. Checkout the first photo, taken before planting on June 1, and the second photo is of the garden today.

Everybody who can stand to save a buck on food, and has room for a few planters around the yard, could benefit from planting vegetables. This year I shopped worn out book shelves at garage sales and turned them all into planter boxes. I LOVE the summertime!